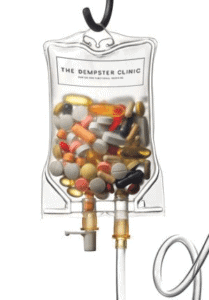 When Elaine Kunda felt a cold coming on early in the winter, she decided to be proactive about her health and get a vitamin intravenous.

The 36-year-old CEO of communications firm b5 media says she was busy, stressed out and not sleeping or eating properly.

She heard about these “vitamin cocktails” through friends who had similar lifestyles.

“I felt better almost immediately,” Kunda says about the first infusion she received from her naturopath, a doctor who uses natural substances to treat and prevent illness.

Although vitamin infusions have been around for decades — they are popular with many professional athletes — they’re gaining mainstream interest from patients looking for preventive treatments and natural ways to deal with chronic conditions, according to John Dempster, a naturopathic doctor based in Toronto.

Dempster says intravenous vitamin therapy — a mixture of vitamins and minerals administered intravenously — is becoming one of his most requested remedies to treat such conditions as fatigue, fibromyalgia and depression and chronic diseases such as cancer.

According to a recent report by Statistics Canada, 20% of Canadians aged 12 or older have used some form of alternative health care in the span of a year.

The Myers Cocktail is the most popular of Dempster’s infusions and runs between $100 and $145 per session. It’s a a mix of B vitamins, vitamin C, magnesium and calcium.

Another vitaminintravenous gaining popularity is one that includes high doses of vitamin C to treat and prevent cancer, Dempster says.

“This is a very safe alternative to chemo,” Dempster says. “And it’s something you can do with chemo.”

Dr. Brian Davies, a naturopathic doctor in Vancouver, says he gives cancer patients around 25 grams of vitamin C through an intravenous in one sitting, usually three times a week for a period of roughly three months, and will then re-evaluate how the treatment is going.

Many in Canada’s medical community question the merits of such treatments.

“Most decisions we as medical doctors try to make are based on some scientific evidence. I’m not aware of any randomly assigned double-blind control trials that show IV vitamins are helpful,” says Dr. Mel Borins, a physician based in Toronto.

Dr. Charles Blanke, head of medical oncology at the B.C. Cancer Agency, says: “No I would not suggest it,” when asked about vitamin C infusions used to treat cancer. “I would if I saw scientific evidence.”

“If you want strong, hard evidence it [vitamin C infusions] will treat cancer, it doesn’t exist,” Blanke adds. “If it’s used with chemo, there is strong data suggesting vitamin C can harm patients by nullifying chemo.”

Blanke says although he strongly advocates a diet high in fruits and vegetables and low in meats and fats to help prevent cancer, once a person has an active malignancy, there is little if any evidence that vitamins will fight cancer directly.