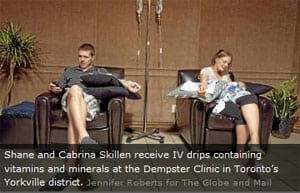 The waiting room at the Dempster Clinic in Toronto is designed for relaxation: Patients can kick back in one of four oversized leather loungers, watch a DVD on the flat-screen TV or take a snooze. They typically enjoy a cocktail, too.

No, not a martini or a manhattan in a chilled stem glass, but a cocktail containing vitamins and minerals dripping slowly into their veins.

Intravenous micronutrient therapy (IVMT) has been used for decades as an alternative treatment for chronic conditions such as asthma and fibromyalgia.

Recently, however, people suffering from the modern ailment of burning the candle at both ends have begun to add the drips to their laundry list of anti-aging remedies and lifestyle enhancements.

“I wake up the next day and just feel better,” says Ann Layton, who runs a busy public-relations agency in Toronto and goes to the Dempster Clinic every two months or so. “I have a lot of late nights and I’m always travelling. Sometimes I’m just not eating properly and it helps when I’m crossing all those time zones.”

Athletes, rock stars and scientists are also among those frequenting naturopathic doctors for the fast-acting boosters. One California nurse told CNN last year that she administered a popular form of the injections – called Myers’ cocktails after the Baltimore doctor who pioneered them – to the late Michael Jackson instead of prescription medication. Last month, famed scientist and author Raymond Kurzweil attributed his good health in The New York Times to intravenous therapy.

The main benefits of Myers’ cocktails, advocates say, is the efficiency with which the nutrients contained in them – high doses of vitamins C, B6 and B12 as well as water-soluble minerals such as magnesium – are absorbed when injected directly into the bloodstream. Separate infusions of glutathione, an antioxidant that is present in the body but diminishes over time, are used to bolster the immune system, revive skin tone and smooth out complexions. Chelation therapy is another intravenous procedure in which a synthetic amino acid called EDTA (ethylene diamine tetra-acetic acid) helps to remove heavy metal toxicity.

IV devotees compare post-therapy results to a shot of strong medicine or the afterglow of a week-long vacation, citing radiant skin, improved energy and a feeling of well-being.

“To be honest, I can’t tell you what’s placebo and what’s not,” says MTV Canada personality Dan Levy, who underwent IV treatment a year and a half ago to overcome a bout of bad colds. Levy says he felt stronger following his 45-minute procedure, which he describes as “cooling all through the body,” but concedes that psychology may also have been a factor. “Just knowing that that many vitamins were infused into my bloodstream … couldn’t have been a bad thing.”

John Dempster, the naturopathic doctor who has been administering intravenous therapies at his eponymous clinic for four years, emphasizes the health benefits of Myers’ cocktails over more superficial ones.

“We’re a wellness clinic and medical clinic, not a fad clinic: These need to be used responsibly,” he says. “I’m not here to provide a quick fix. I’m here to provide adjunct therapy and a proper foundation of health.”

Still, the doctor admits, he often sees patients who are not so much sick as they are exhausted and dealing with adrenal fatigue and weakened immune systems (and, occasionally, extreme hangovers). Last month, for instance, a music label had him on call during the MuchMusic Video Awards in case any artists were on their last legs (as it turns out, his services weren’t needed this year). In 2009, one band also invited him to be its tour doctor after members had positive responses to the therapy.

Alison Dantas, chief executive officer of the Ontario Association of Naturopathic Doctors, says people’s fast-paced, frenetic lives are what is prompting more interest in naturopathic medicine and IVMT. While underscoring the difference between a recreational boost like caffeine and the injections, which must be given by trained professionals, she takes no issue with their trendy turn. “It raises awareness about complement therapies and medicines that assist people in staying healthy,” she says.

Of the 867 practising naturopaths in her province, Dantas says, 156 are intravenous-certified. She expects that number to increase. “We see a growing need because of the lifestyle of the population; it’s very effective in mitigating the risks of chronic disease but also managing chronic disease,” she says of Myers’ cocktail.

The treatment gets its name from Maryland physician John Myers, who is credited with using the injections to treat fatigue, chest pain and palpitations. Shortly after he died in 1984, another doctor, Alan Gaby (who had never met Myers), began caring for many of the late physician’s patients and developed a modified injection that is the foundation of what naturopaths administer today.

“In a perfect world, this would be a component of general medical practice for a particular usage,” Gaby says by phone from Concord, N.H., where he is working on finishing a textbook, Nutritional Medicine, to be published later this year. “Do I think it should be used for heart failure? Yes. For glowing skin? No.”

Regardless of why patients use it, IV therapy appeals to many proponents because of its ease and convenience, eliminating the need, for instance, to constantly pop pills.

“I take a multivitamin at home,” says Layton, the PR executive. “But when I’m travelling, I don’t want to schlep 18 bottles of vitamins with me.”

Layton began receiving IVMT treatment years ago while battling a serious illness. Now fully recovered, she goes to the Dempster Clinic whenever her energy is low, asserting that “there’s no downside” to the procedures.

Perhaps not, but “there’s no good evidenced-based studies to support them,” counters Toronto dermatologist Lisa Kellett, who says Gaby’s own paper, published in the Alternative Medical Review in 2002, is to date the most comprehensive research on the subject.

Moreover, she says, our “bodies are not meant to metabolize vitamins via IV. We were designed to get minerals and vitamins through our stomachs.”

Kellett’s biggest complaint about IVMT treatment, however, is the cost, which runs upward of $100 a drip (more than double what Gaby says injections cost when he stopped practising in 1995).

A bottle of multivitamins, Kellett adds, costs around $15.

So is Myers’ cocktail the elixir fans claim? This reporter’s experience with the procedure – administered by Dempster – yielded a negligible result. There was no post-spinach jolt of energy or strength a la Popeye and little discernible difference in my skin. (In fairness, I had just returned from a vacation.)

Dempster, however, stands by its benefits, citing how the concentration of antioxidants “quench disease and slow down the aging process.”

And Layton, for one, plans to continue her treatments. “My job requires that I be in public, so it’s money well spent. If I feel blah, it’s not helping my business, so I look at it as a business expense.”

The fortysomething exec even hopes to persuade a friend to get in on the intravenous action. “It’s like a manicure – it’s boring. You might as well bring someone with you.”